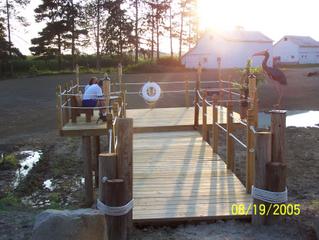 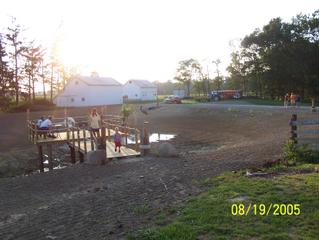 My Aunt and Uncle that had the pig roast had a Birthday Party for their son (my cousin, of course) last night. It gave me the opportunity to get a picutre of their new dock. They decided to put a big pond behing their house with a dock. It looks REALLY good. I guess it will eventually fill up, but for now it is a big mud hole. But it still looks good!
Posted by Katie at 1:38 PM 1 comment: Links to this post 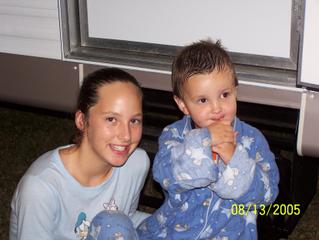 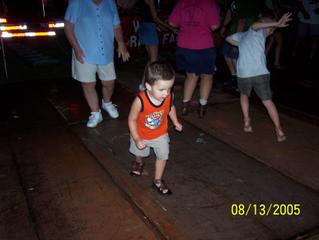 My Aunt and Uncle's 16th annual Pig Roast was held on 8/13/05. We arrived late, around 6pm, and hung out at my sister's new camper. We also took our dog, Teddy, with us, because we did not want to leave him home alone for what we thought would be several hours. The Pig Roast usually begins around 4PM, at least that is what the invitations say. We usually go earlier - around 1 or 2 PM, but this day was particuarly hot and humid, and I did not really feel like chasing after Conor the entire day. After we arrived, the rain came. It was a welcome relief! Jeff, Ceara, Conor, and I took Teddy for a walk back to the barns behind the house. It was half-way there that the rain came. I certainly didn't mind it! Although, I had spent a little time straigtening my hair out, and the rain was undoing that!

I know, I know, who fixes their hair for a pig roast?? Not usually me, but you see, I had gotten another hair cut the day before. And I got several layers cut, as well as BANGS. I have not had bangs for well over 10 years, I believe, and when Glenda suggested them, my response was "sure, why not? I need a change." I had no idea that my hair would spring up in curls like I had just gotten a perm. I know my hair has a natural wave to it, but I didn't think it could be THIS curly! And my bangs? If they were straight, I could deal with them. But the curly, unmanagable mess that they are? Not used to them yet. So I straightened all my hair before the pig roast. And the rain just made it curl right back up!

Oh, well, it was kinda worth the cooling off. We stayed back in the barn for a little bit, allowing Conor to sit on a big tractor. Then when it appeared to lighten a bit, we walked back to the camper. Needless to say, we were soaked. I certainly didn't mind, but Ceara and Conor were cold. So Ceara got her pajama's out and put them on, and Conor had to wear some too, as you can see by the picture above. After it quit raining and everyone was dried off a bit, we went wandering about. The band was playing, so we went over to the big tent next to the stage. Conor LOVES to dance. So off he went to the dance floor to cut a rug... (second picure).

We didn't end up staying very long. Conor hadn't been feeling well, allergies or something like them, and he didn't want to stay late. So around 9:45pm, we headed home - Jeff, Ceara, Conor, Teddy, and me. You may be asking, where's Allie? Well she is just way too cool to hang out with her mom at such an event, and we rarely saw her the entire night. She stayed to spend the night and since she didn't lower herself to acutally spend any time near us, I didn't get the opportunity to get any pictures of her. The teenage years have almost begun.... God help me. :)
Posted by Katie at 1:07 PM 2 comments: Links to this post 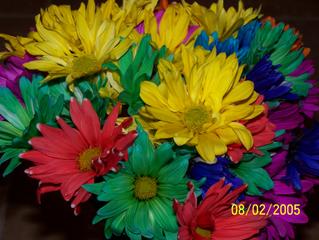 Conor and I went shopping the other night while Allie was at soccer practice and we saw this pretty bouque of flowers and had to get them. They are, of course, dyed, but they were so colorful and pretty that we had to get them. I wanted to preserve the image, so I took a few pictures. They are still looking very good on my dining room table. :)
Posted by Katie at 9:34 PM 1 comment: Links to this post