I posted Allie's pictures, but never posted Conor and Ceara's! For one reason, Ceara didn't get her disc with her pictures and I had to call for them to mail it to me, so I didn't get it for a while.

So, a lot late as these are from the beginning of the school year, but here they are! Once again, taken by Lifetouch.

Ceara 8th grade (and yes, she chose to wear that shirt for pictures...): 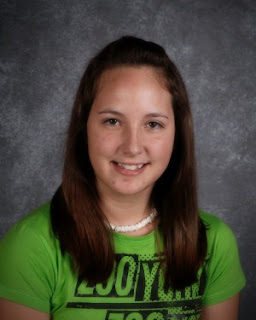 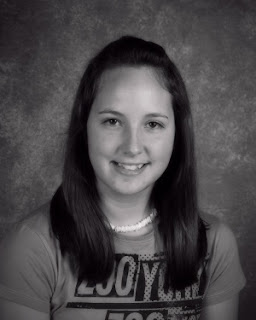 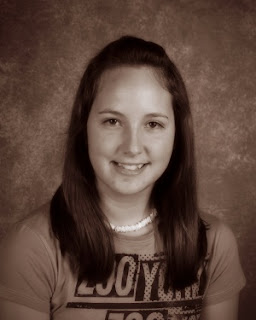 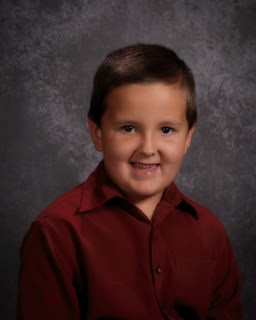 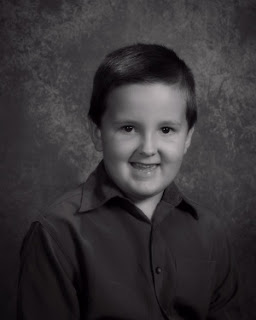 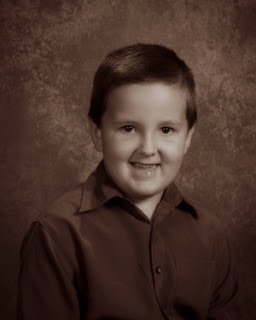 For those of you with dry skin

I don't know how well this product works as it is intended, since I don't really use it as lotion in the shower... but my mom gave it to me and told me to put it on my feet before I go to bed each night. And it works magic on dry, calloused skin! 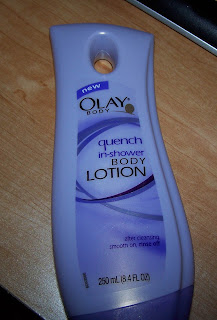 I have tried a lot of products on my dry skinned feet, I've used many stones, sand paper-like products, lotions, etc., and nothing works as well as this stuff does. I usually put it on after I get out of the shower, though. Not just when I go to bed.

I definitely recommend you try it!! :)

Posted by Katie at 8:20 PM No comments: Links to this post

Well, I took my camera to the circus, but it didn't work when I tried to use it. So, I took a few shots with my phone, and they were REALLY dark. I tried to lighten them with photoshop, but this was the best I could get.

We got a bag of cotton candy and it came with a foam tiger hat, so I got all the kids with it on. 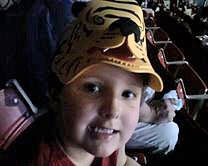 I have no idea what Allie is doing in this picture, she was TRYING to look weird, or so she says... 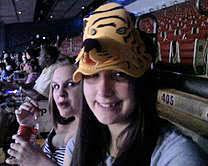 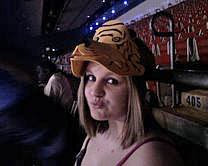 And then Allie took her own picture... 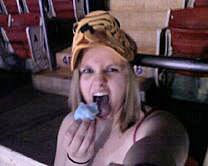 Just thought I'd share some pictures. :) We had fun.

Text messaging is something that I've never really gotten into. On regular cell phones, you have to push 2 three times to get a "c" to display, and to create words like that was just... not my thing. So when we added the girls to our plan and added text messaging for them, I didn't expect to use it too often. When I went to get their phones, they had palm pilots that were free with the plan and they have mini keyboards on them. I got one for Jeff as well because his phone was breaking.

Jeff wasn't thrilled with the phone and didn't want it, so I gave him mine and I took it. Since it is a little bit easier than a number pad, I have used it a bit, but not a whole lot. Mostly just with Allie, sometimes with Ceara (though not nearly as much), and some other friends as well. I usually keep my responses short, I am not about to type a book on a mini keyboard, and if it takes more responses than a few, I usually will just say, "Call me, I don't want to type!" There are a few exceptions to this, like when Allie is texting me in between classes at school. I know she can't call me. (Side note, apparently "texting" is not a word recognized by spell check.)

A few of Allie's friends text me as well - most of them call me mom anyway, so they just send me messages occasionally. Alex is one of them. His dad lives in our neighborhood, and he spends a bit of time at our house when he is visiting his dad.

I like Alex, he is a good kid and I don't mind him hanging around. He started texting me one day, just random stuff... "Hi" "how's your day?" - or telling me about stuff going on with him in school, or whatever.

So yesterday, he sent me a message. The whole thing frustrated me. Here is the conversation:

Alex: Do you care if Alli comes to my soccer game Saturday?

Me: What time and how? (like did she need a ride, or would his dad be taking them... I didn't want to type all that!)

Me: U already said the day... I mean are u coming to ur dad's this weekend, would she need a ride? Where is the game? (YES!!! I abbreviate!!! It is not that I don't know how to spell "you," it's that I want to limit the typing on the little keyboard where one finger can press 6 different keys! I don't abbreviate as much as I could, but I do some! DON'T JUDGE ME!)

At that point I just stopped responding. I figured I would just tell Allie to communicate whatever it was to me when she found out. When I got home from work, I showed Allie the conversation and told her to work it out and let me know.

So, it was particularly frustrating for me to have a similar conversation with Allie today. Here is that one:

Alli: Do you care if I go to Mik's after school? To work on french makeup work?

Alli: And will you pick me up from her house and take me to volleyball after work?

(It's not like I keep my phone right next to me during work - it is usually in my purse on vibrate. I check it periodically.)

Me: Idc (I don't care) but I don't know where she lives

Alli: she lives on blah blah but her house caught on fire so she's in a apt i think... N Mik's dad loves chrissy.

(Twinge of irritation... I start responding and she sends another message before I was done.)

Alli: mik said to make her a eye apt today

Me: What does that have to do with anything? That her dad loves chrissy? And why would I make her an appt?

Me: just give me an address.

(if she were in front of me at that moment I would have choked her. not really, but... FRUSTRATED!)

Me: OMG! you did NOT say chrissy. Reread ur msgs Alex. (yes that was a dig because I had told her how much it irritated me that Alex didn't answer the questions I was asking...) You said "can I go to mik's after school" ...

Alli: sorry I was textin mik's mom too n I got confused. She lives on blah blah

I think I'm going to have to start typing random things in response when they start doing this to me. At least then I can laugh at them and enjoy their frustration! See how they like it.
Posted by Katie at 11:09 AM 2 comments: Links to this post

Yes, I know they are about a month late! I just uploaded them from my camera and thought I would share. I'm not going to write a lot about it... they are self explanatory, I think.

Easter Morning, Conor got a basket and the Easter bunny left one big basket for the girls and Jeff to share. Too bad Ceara wasn't here and Jeff pretty much ate all the chocolate out of the basket before she came over the following weekend... 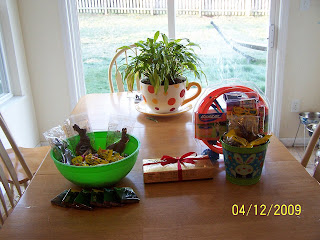 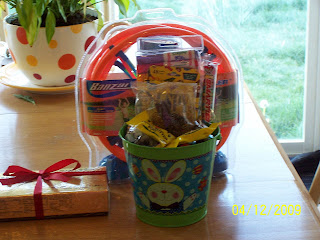 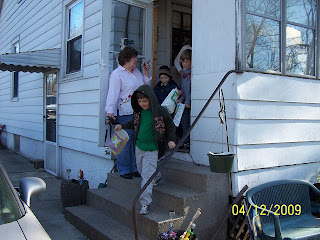 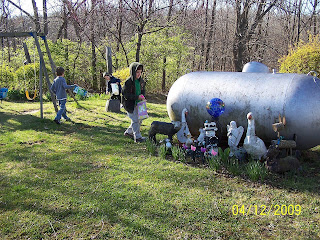 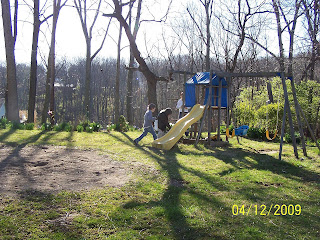 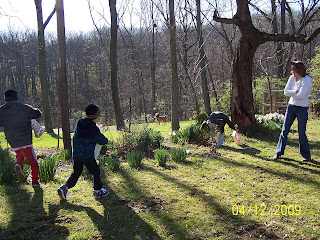 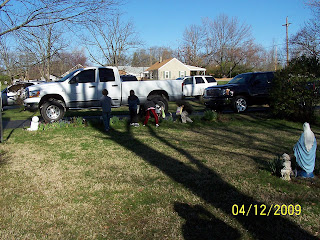 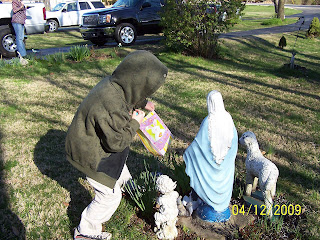 Someone brought eggs that were filled with confetti and the kids had a blast breaking them over each other's heads. 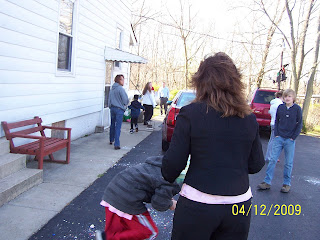 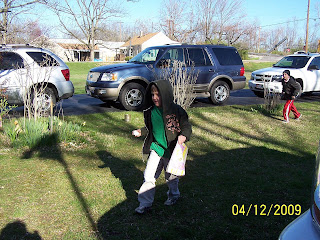 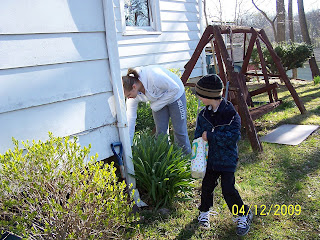 There was one egg that we could not find and everyone got in on the search. It was a green egg that was hidden in these flowers... 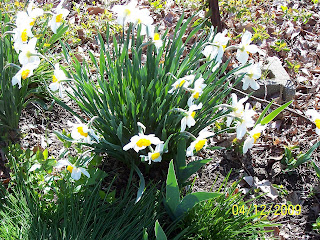 And then we went next door to my mom's house and hunted more eggs! But at Mom's it's more of a scavenger hunt - each kid has to find a certain amount of each color. 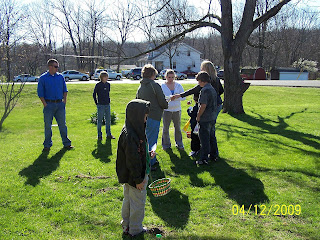 And for some reason unknown to me, I only took the ONE picture at my mom's house. I think it's because I was busy hunting eggs. :)
Posted by Katie at 10:12 PM 1 comment: Links to this post

Go placidly amid the noise and haste, and remember what peace there may be in silence. As far as possible, without surrender be on good terms with all persons. Speak your truth quietly and clearly; and listen to others, even the dull and ignorant; they too have their story.

Avoid loud and aggressive persons; they are vexations to the spirit. If you compare yourself with others, you may become vain and bitter; for always there will be greater and lesser persons than yourself. Enjoy your achievements as well as your plans.

Keep interested in your own career, however humble it is a real possession in the changing fortunes of time. Exercise caution in your business affairs; the world is full of trickery. But let this not blind you to what virtue there is; many persons strive for high ideals; and everywhere life is full of heroism.

Be yourself. Especially, do not feign affection. Neither be cynical about love; for in the face of all aridity and disenchantment, it is as perennial as the grass.

Take kindly the counsel of the years, gracefully surrendering the things of youth. Nurture strength of spirit to shield you in sudden misfortune. But do not distress yourself with imaginings. Many fears are born of fatigue and loneliness. Beyond a wholesome discipline, be gentle with yourself.

You are a child of the universe, no less than the trees and the stars; you have a right to be here. And whether or not it is clear to you, no doubt the universe is unfolding as it should.

Therefore, be at peace with God, whatever you conceive Him to be, and whatever your labours and aspirations, in the noisy confusion of life, keep peace with your soul. With all its sham, drudgery and broken dreams, it is still a beautiful world. Be careful. Strive to be happy.

Max Ehrmann
Posted by Katie at 8:43 AM 4 comments: Links to this post