I really don't like that word. I have to think too much about it to spell it. It should be spelled kindergarden - why does it have to be a T? There is no t sound in the word when you say it. BAH!

Anyway, Conor is now officially signed up to begin kindergarten in the fall when school starts. We had registration Thursday - which used to include testing as well, so I scheduled the day off. Then I found out that there wasn't going to be any testing - new thing this year is that they do that right before school starts in August some time. So... Conor didn't even have to go.

I could have worked anyway because the registration lasted until like 7 or 7:30PM - but I chose to keep the day off. Just because I wanted to. Conor ended up going to Cindy's (his baby sitter's house) because he just HAD to - he had bought a ring for Carly and he HAD to give it to her.

I took him to drop him off at Cindy's and he gave Carly her ring and all the other kids immediately said, "What did you bring for me?"

Ashley, who calls Conor her boyfriend, asked where hers was, so Conor explained that it cost a whole $.25 and he couldn't afford more than the one he got for Carly. So then he sat down next to Carly and Ashley asked to sit on his lap. Ahhh the girls.

So I left at that point and went home to be a bum. Jeff and I took him to the school to register him later in the day. Even though he didn't have to be there, we wanted him to go to see what the school was like.

When we got there Conor was excited and wondered if Carly would be at the same school. It seems he doesn't understand that she goes to school in a different district. We went in and filled out the paperwork and afterwards went to see what the classrooms looked like. They were all locked, so we could only look through the doors until the janitor walked by and let us go in and look around in one.

The classroom was full of color and fun - beanbag chairs, a wall of computers, the alphabet on puppets, little mail slots for their papers, a small aquarium with cocoons turning into butterflies. Conor loved it. He is very excited to start school.

We also saw a flyer for soccer on one of the walls, so we are going to be signing him up to play soccer in the fall.

My baby boy is going to school soon. I hope he loves it and does well.
Posted by Katie at 11:45 AM 2 comments: Links to this post

Today would have been Charlie's 23rd birthday. There is not a day that passes that I do not think about him. I'm not much into sharing my feelings on here, but I could not let the day pass without acknowledging him and remembering him on my blog. 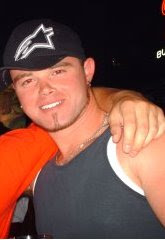 I still have the Peace Lily plant that was given to me when Charlie died. I think of him when I see it. I think of some of the times when I would pick him up from his mom's and bring him to dad's house. I worked close to him so it was easy for me to do.


I think of the time when I was upset and he did Jim Carrey impressions to make me laugh.


I think of all the conversations I had with him about Dad's reactions to certain things - like his ear being pierced and his tattoo he got. We had some laughs when trying to guess what he would say.


I think about his tourettes and the tics he had and how much I ignored them when I noticed them.


I think of him when I saw him at Brett's funeral - how I hugged him and cried and told him I didn't see enough of him now that he was older.


I think of his snake he had when he was little.


Every time I see a skate board I think of him - hanging out at the skate boarding place where I picked him up from sometimes. Or the DVD I made of the VHS tapes that he made of himself. In those tapes, it shows him trying different moves over and over and over again until he gets it right. He didn't give up, he just kept on trying until he got it right.


I think of him when I think about painting my house - because he was supposed to help me.


I can't very well go over every thought I have in this post, but the point is I DO think about him. Every day. And I am glad that I do. I don't ever want to forget him. 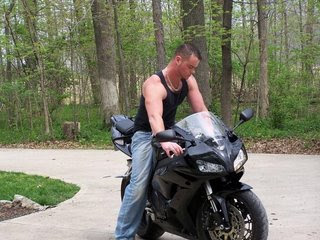 Happy Birthday, Charlie. I love you very much.

Happy Mother's Day to all you Moms out there!!
Posted by Katie at 10:55 AM 1 comment: Links to this post

Being typical teenage girls (uhhh, wait. I don't remember doing any of this when I was a teenager! oh, yeah, no digital cameras then...), Allie and Ceara like to take pictures of themselves. Either via a mirror reflection, or holding the camera at arms length to take the shot. 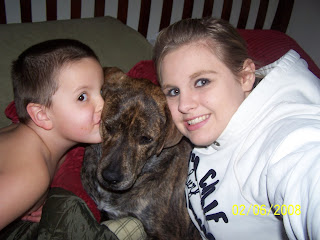 And now they've started to include Conor. He loves to take pictures and will get my camera and take various strange pictures of things and people. I usually just delete them though - thank goodness for digital cameras! 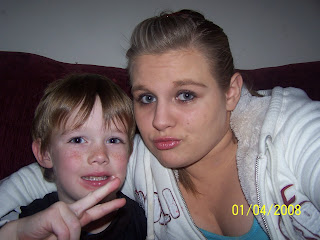 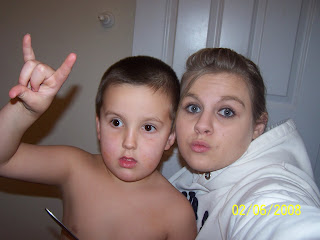 Any thoughts on what he could possibly be thinking? 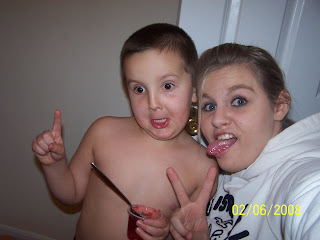 This totally cracks me up. 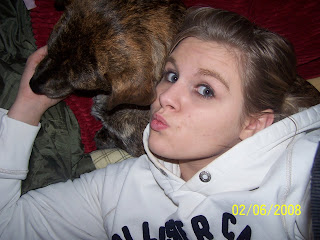 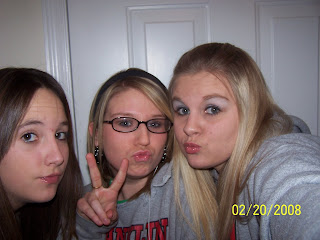 Ceara looks to me like she is about to roll her eyes at Allie and Chrissy - but I know better. She poses too. I just don't have those downloaded to my computer yet!
Posted by Katie at 9:07 PM 1 comment: Links to this post

My mom has this quilt that I fell in love with as soon as I saw it. There is just something about it that I love, but she was not willing to part with it. We went to IKEA and bought a new bed. After we had it all together and didn't have a big enough blanket / comforter for it, my mom surprised me by giving it to me. It made my day. :) 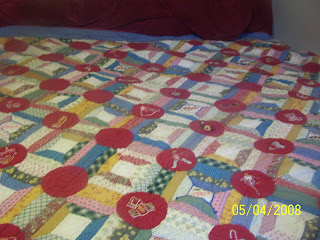 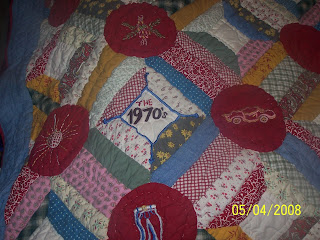 And the 1940s. No, don't ask me what the pictures mean. I just love it. For the colors and the theme. 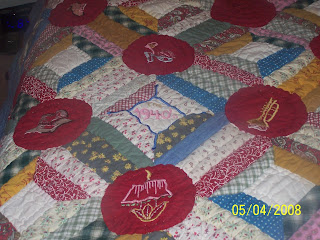 Yes, I know I've been a slacker. Each time I have opened my blog in an attempt to post something, I have been distracted. By what? The blogs I have linked on my side bar to the right. The newest edition - Pioneer Woman - has me addicted. I still haven't read all her entries, but I'm trying to! If you have NOT read her site, I suggest you go on over right now and check her out. Funny, interesting stories. Contests (with prizes). Photography (at some point I will reload Photoshop on my computer and try all this out!). Cooking. Home and garden. Even if you know how to cook, her cooking site is excellent. The pictures of what she is doing step by step are amazing.

I also had some computer problems and had to re-image my computer. Thus losing all my pictures (I did, however, back them up) and all my programs (Photoshop, Office) and I have yet to reload them.

I did take some time last night and uploaded some pictures that I have taken recently and will be posting all of them below this post (several posts). So, scroll down. If you don't see any new pictures, then you've come too soon and I'm still working on it! I do have to do some work as well ya know. :)

OH! And *ahem* I will be back dating them so it will appear that I didn't skip two months of posting. HEY! It's my blog and I can do that. So, ha!