I guess I'm going to have to start with Sunday because blogger won't let me move the pictures and videos around.  Or I am just a noob and can't figure it out.  Sunday, I exchanged Conor for Lily - Allie and Jon took Conor to Kings Island and Lily spent the day with us.  Time flew by while I had her, it didn't seem like they were gone very long.
That first video is actually from last weekend when they were here visiting on Labor Day.  It's so fun to watch her laugh.  And she can go from cracking up to somber in just one second.  She absolutely adores her daddy - he was the one making her laugh and coo.
In the second video, she was watching the dogs wrestle around, and it absolutely cracked her up.  It was such a nice day, we put her swing on the deck for a little while so she could spend some time outside.
Saturday was full of activities as well.  First thing in the morning (9am) Conor had a soccer game, so we were up and at the park early to cheer him on.  Ceara had spent the night with us and she went with us as well.  She was supposed to be off work, but once we got home and made plans to make home made pizza, they called her in.  She wanted more hours so we put the plans on hold until she came back after work.
Gage came over to play with Conor and I left the boys home and went to a Euchre party.  When I got home, Ceara and Grant were already here and ready to make pizza.  I had made the crust earlier in the day, and made the sauce last week, so they set out to make them.  I should have taken step by step pictures, but I forgot. 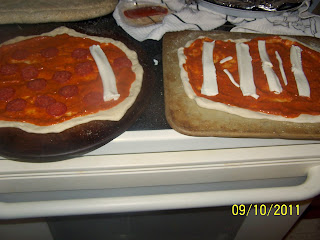 Ceara took the pictures of the "works in progress" and we forgot to take a finished picture.  Ceara made the one with the peperoni, while Grant made one with just cheese. 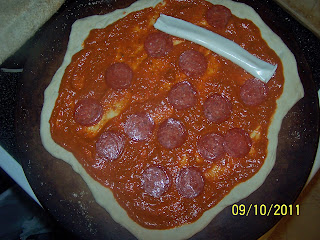 We'll try other toppings at another time, but for our first time making it all from scratch, it turned out pretty good. 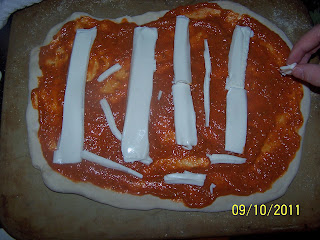 Friday night we just stayed home and relaxed - had to prepare for the weekend after all.
Posted by Katie at 8:15 PM 3 comments: Links to this post

Barb sent me this video of Conor today, and it brought back such memories!  Oh, how little he used to be!  How did he get to be so big?  I miss when he was little!
Thanks for the stroll down memory lane, Barb!
Posted by Katie at 8:55 AM 3 comments: Links to this post

I can't believe it has been so hot!!

Anyone remember this song?

Posted by Jeff at 8:50 PM No comments: Links to this post