Photo Sharing - Video Sharing - Photo Printing - Photo Books
Edit: Just to clarify, yes, I did say I wanted to get it on tape if she fell... but I in no way, shape, or form was referring to a fall that would seriously hurt her... just the little ones that are funny. I would never want to see my only daughter injured.

A few pictures from the holidays

Since blogger now limits the amount of pictures you can put on your blog by the amount of space they take, I decided to upload smaller pictures.

From our family gathering: 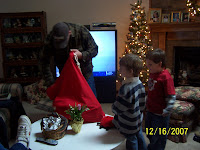 The Santa bag is searched for the toys to hand out, Conor and Gage wait a little impatiently. :) 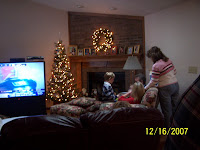 Everyone is watching something that is on the TV - I don't remember if this was the movie, or the football game.. 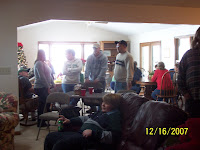 Below, on the left, is Pete - the instigator. 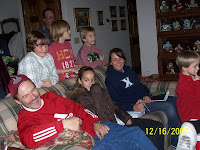 Below are pictures from our Christmas Eve at my Mom's house. 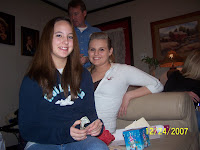 Conor and Gage opening their gifts: 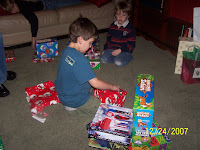 Allie and Ceara - they are never usually very far from the other. I am really glad they are such good friends. 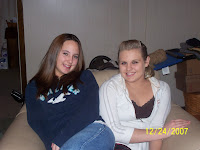 Molly making bunny ears behind the boy's heads, but her fingers kinda blend in with the curtains behind her. 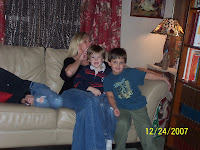 Molly and her two boys, Austin and Gage: 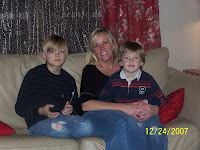 The grand kids (note in the background our senior pictures... Molly so had the "big hair" going on): 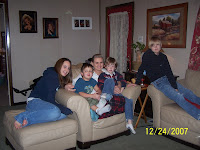 My assistant chefs when we were baking: 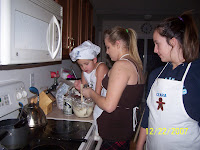 They were so helpful! 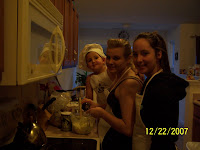 Posted by Katie at 9:36 PM No comments: Links to this post

The days leading up to Christmas were filled with lots of baking at my house. The kids and I were in the kitchen for the majority of the day, for two days in a row. We made an assortment of goodies which we packaged up and gave out to our family and friends. Jeff helped a little, but was not in the kitchen anywhere near as long as the rest of us.

M&M cookies, Chocolate Nut Balls, Nut rolls, Cream Cheese cookies, One Good Thing After Another bars, Chocolate Toffee bars, White Chocolate covered snack mix and.. I think that was all. It's been a while, so I don't remember exactly. A few of those took the two days to do because the dough had to sit for 12-24 hours, or I was too tired to do them at the end of the first day. My kitchen was a tornado - make one thing, clean up the mess to make another. It all went rather well, though, with the kids helping.

On Christmas Eve we went to my Mom's house for dinner - a ham dinner that was wonderful. As we were getting ready to leave to go to mom's house, my sister called and told Allie that they had already opened their presents and that we were late. In fact, they were just early, the time agreed upon was 6PM and it was about 5:40 when she called. So, we had been rushing around, trying to get everything and everyone ready, and upon hearing that they were done already - I figured why rush?

When we got to Mom's we found that they actually hadn't started without us, that was Molly's way of making us hurry up. Too bad for her that it back fired and it actually made us take our time.. :)

We ate dinner, did a gift exchange, then just talked while the kids played. When we started to leave, we found out that Jack had made stilts for all the kids for Christmas and they were out in the garage. Allie was the only one who would actually get on and try them, and she tried over and over again while we all stood and laughed, err.. watched and encouraged her.

I did take a video of her walking on them - she did finally get it down and was doing very well on it. I will put it up later in another post.

We got home and Jeff took the kids to church, while I stayed behind to find where I hid their gifts, wrap them, and re-hide them. Somehow Jeff got out of all the buying and wrapping of gifts this year. I finished with about 10 minutes to spare before they got home.

The kids got ready for bed, and Jeff went to bed as well. Santa came to visit us, ate the cookie that Conor left for him on the tree, and left some goodies for the kids as well. :)

Conor woke us up on Christmas morning, excited that there was a bike that was clearly for him next to the tree. Although Jeff did try to stake a claim for it, Conor pointed out that it was too little for Daddy. We woke the girls up and the kids opened their gifts. We then had to get ready for breakfast - which I have made every year for a very long time. It somehow have become a tradition for me to cook breakfast on Christmas morning.

This was the first year that Molly did not come to breakfast because she wasn't feeling well, so I ended up with a lot of food left. So we had Jeff's parents (Barb and Jim), Naomi, Jerry, my Mom, Jack, and my Dad stopped by later. Bernie didn't make it because they were having issues with their shower and she didn't want to come over and stink up our house.. ;)

After breakfast we did our gift exchange with Jeff's family and then it was time to play with the new toys. Conor, Jeff, Jerry, and Naomi tried to put the new Lego castle together that Conor had gotten. I cleaned up the kitchen and watched from there.

It was a nice, relaxing, fun day.

I hope everyone had a Merry Christmas as well!
Posted by Katie at 9:58 AM 1 comment: Links to this post