Today, my guys made me breakfast... almost in bed, but not quite - their activities woke me up.  Conor served it to me - with a towel hung over his left arm and the plate (or whatever he was bringing me) he carried with his right hand.  First course was bacon, eggs, and toast.  Then he brought me a glass of orange juice.  Next, he brought me a bowl of homemade hash browns.  Still with the towel over his arm.  He went back to the kitchen saying, "Pancakes are coming, ma'am."  He referred to me as "ma'am" the whole time, like he was my waiter.

"Too bad!" was the reply from the kitchen.  (Jeff)

So, Conor was back in just a couple of minutes with a pancake.  I did my best, but couldn't finish it all.  My usual breakfast is coffee... and that's it, so it was a bit of a shock to my system.  It was all WONDERFUL, though.

Now, I have that "full" feeling and the sudden urge to go back to bed!  Thanks, guys!  What a great start to the day.
Posted by Katie at 11:14 AM 1 comment: Links to this post 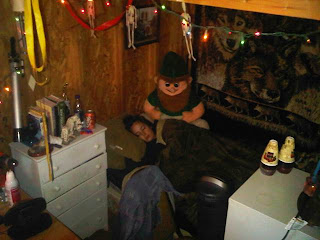 I have been trying to help Ceara like books more. She is supposed to read a certain amount for school and she doesn't enjoy reading as much as she should for a teenager. In an effort to help her, I have both the book and the audio for Frank McCourt's Angela's Ashes. She has been enjoying this book with me out in the mancave on weekend when we can hang out.

Recently, I just got a nice little space heater for the mancave for these chilly November days. It was hard to get Ceara to come out here because she hates to be cold. I thought with the extra incentive of heat - I could get her to come out to listen to more about Frankie. We couldn't just leave him in the middle of the Atlantic on his way to Ireland! Anyway, as it turns out, maybe the mancave is a little too cozy. Well have to learn more about the McCourt's adventures after a little nap.
Posted by Jeff at 4:19 PM 2 comments: Links to this post

The soccer tournament was last Saturday (Oct 30th), and Conor's team lost the first game so there were no more after that.  The game itself was hardly a tournament by any standards.  Not that I didn't enjoy cheering for my son, and watching his team try so hard - I did and they did.  However, if they are going to have tournaments and go through the motion, they could at least supply referees who know a little bit more about the game than the 6 and 7 year olds playing.  A little consistency would be nice.  I won't go off on a rant, although I really could, but two things stick out for me.  First - the opposing team got the kick off at the start of the game and also at the start of the second quarter.  I specifically noticed this because when they kicked off at the start of the game I commented on how well they handled the ball.  When they lined up for the second quarter and kicked off again, I questioned whether anyone was paying attention.  Second - in soccer, you are supposed to switch sides for every quarter, which has irked me the entire season that our particular league does not enforce it.  Anyway, at the tournaments, they initially started out switching sides.  First and second quarter were played on the correct sides of the field, however the third and forth they did not switch and the refs did nothing.  They barely watched the game from what I saw.

I did not make a scene, I didn't expect much from the tournament and I got what I expected.  Anyway, soccer season is now over.  Conor's team did an excellent job and did not lose any games all season.  They did tie one, but the others they won.

Trick or treat was Saturday night in our parts, and since we moved to the middle of nowhere where no one trick or treats, I made arrangements to go to a friend's house. Conor was a Knight of sorts.  He used the sword, shield, and helmet we bought him at the Renaissance Festival along with a Knight shirt from a costume in a bag we got him.  I had originally thought I would make something, but time is passing so quickly and it all snuck up on me, so we went to the store THAT DAY and found one costume that would do the job.  Unfortunately, it was not his size, but I was able to do a little creative ripping to make it look just fine.

What's that?  You'd like to see a picture?  Yeah, me too.  I didn't take any, though.  I think Jeff may have taken one on his phone, so we'll have to check on that later.

Amanda lives in a cul-de-sac and had set up a table with chairs in the road and had a fire pit set up behind it.  The neighbors all came out as well and we had several candy giving people all right there for the kids go trick or treat.  The men took the kids house to house, while the women stayed behind to pass out candy.  Amanda had made White Chicken Chili (sooooo good!) to share with everyone, and various people brought sides and desserts.  I made Caramel Apple Cheesecake Bars with Streusel Topping and cut them into bite size servings.  They were a huge hit.

After trick or treat was over, the kids went in the house and watched movies and played Rock Band on their game console, while the adults gathered around the fire to talk.  As the fire died down, we move into the house where we found the kids with their candy dumped out on the couch and several empty wrappers.  We left around 10 and Conor complained of a stomach ache on the way home.  So of course I blamed the candy - "That's what happens when you eat too much candy..." - which, really, he hadn't.  His empty wrappers equated to that of a regular sized candy bar, so I hadn't been too upset with him.  However, I did think that maybe the sugar was to blame for his stomach problems.

He was on the couch and feeling queasy when we got home, so I put a trash can there - just in case.  And boy was it ever needed - but the aim didn't work out and it wasn't used.  So, after round 1 clean-up involving shampooing my carpet at midnight on a Saturday night, I put down towels around the trashcan.  Those would have helped had he been able to even move for round 2 - he was asleep and woke up vomiting on the couch / blanket / pillow.  Leather couch, so at least it was something I could wipe off rather than have to shampoo it out.  Everything cleaned up, laundry started, exhausted, I went to bed around 2am.  He is a little boy, his stomach had to be empty by now, right?  Wishful thinking.  I was woken at 3:30am by Conor who had climbed into my bed to tell me he had other problems - the other end kind of problem - and he ended his sentence with vomiting on my bed.  I jumped up and said "GET TO THE BATHROOM!" and he was on his way... leaving a trail of vomit on the floor as well.  So, I stripped the bed - it did not soak through to the mattress, thank goodness - and got the carpet shampooer back out.  Jeff was in his Man Cave and I texted him and said something to the effect of "GET IN HERE NOW!"

Hey, if he's going to stay up all night, he can do it in the house to keep an eye on Conor.  We cleaned everything up, started another load in the laundry, and I went back to bed and left Conor and Jeff watching a movie in the living room.  I don't remember what time I got up, but I spent Sunday doing laundry and cleaning the majority of the day while Conor slept.  Jeff and I both ended up catching the same bug later in the week - but he was in Atlanta when his hit.  Not a pleasant experience!

So, that was our Halloween weekend.  How was yours?
Posted by Katie at 8:54 AM 1 comment: Links to this post