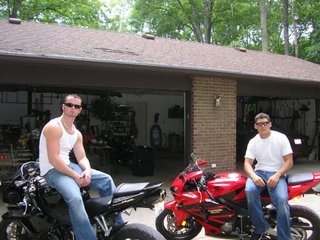 We are planning a road trip! :) Jeff has a week of vacation that he was told he had to take before the end of the year or he would lose it, so he chose the first week of October. I was able to re-arrange the days that I requested off and get the same week off, so we are going to take the kids and go to Vermont. :) I am excited. I have always wanted to go there... especially during the autumn season. My mom will also be going with us. :)
Posted by Katie at 12:54 AM No comments: Links to this post

OK, I was driving to work the other day and was behind a vehicle on the highway that had a 'message' on the rear window. When I read it, all I could think was "If you're gonna put something on your vehicle that is kinda stupid to begin with, you could at least make sure you spell the words correctly."

I meant to write about it sooner than this so I wouldn't forget what it said. I remember the part that irked me, but not the ending. It said - "My man go's ________ " the blank is what I forget, but it was something dumb. So, if you are going to put some sort of lettering on your car for everyone to see, you should double check that you are spelling the words correctly. Obviously she is proud that her man goes somewhere, but seriously, is that something that needs to be put on your car???
Posted by Katie at 10:02 AM 1 comment: Links to this post

Conor is growing up so quickly! He is very smart and has a great memory. On Monday, Labor Day, the girls were both at other places and Jeff had to work, so it was just Conor and me. I dedided to take him to Putt-Putt (miniature golf) to play a game with him. We got ready and drove there only to find they were closed. They have new school hours and are closed on Mondays and Tuesdays, so I told him I would take him on Wednesday after I picked him up from Cindy's house. I explained that it wouldn't be "tomorrow" but the day after that - when they were open. He was OK with that and we went shopping.

On Tuesday morning, he reminded me that tomorrow would be the day he gets to go to Putt-Putt. I assured him I would not forget. So, yesterday (Wednesday) he was so excited when he got up. He said, "Today you take me to Cindy's house, then when you pick me up we're going to Putt-Putt!" Yes, today is the day. :)

When I picked him up from Cindy's house, he was so excited to go. We went to Putt-Putt and got our clubs and balls, and set out to do our 18 hole course. It was so funny watching him, trying to show him how to hold the club, where to stand, everything. He kept twisting the club around and trying to hit the ball.... and the ball was going all over the place. I told him, "If you would listen to me and hold the club the right way, it might work a little better for you."

He considered this and finally said "OK, show me." It occurred to me that after I show him how to do it, and if it didn't work any differently, then he wouldn't believe me... But I showed him how to do it and when he hit the ball, it went right into the hole. He was so excited. After that, he would start out holding the club the right way, but after the first hit, he would run to the ball and somehow twist the club in his hands and knock it around. It took him 10-20 trys to get the ball in the hole on some of them because he wouldn't wait for the ball to quit rolling before hitting it again. When the ball finally went into the hole, he would raise his club in the air and say, "Yeah!" It was very fun.

I managed to make 3 hole-in-ones... and he would say, "That doesn't mean that you are winning." He would then pick my ball up out of the hole and give it to me and tell me I had to still play. :) He did fairly well on all the holes that were on flat surfaces. It was the ones on a hill that would cause the 10-20 putts.

A couple of other funny moments via Conor recently:

Allie and Ceara took Conor to the park in our subdivision one day. As they were walking down the sidewalk there was a man pushing a lawnmower down the sidewalk. Allie said, "I wonder what he's doing with that?"

Conor responded with, "Duh, mowing the grass!" (He gets the "duh" from his sisters...)

So when they got up close to the man, Conor asked him what he was doing with the lawn mower. The man responded that he was going to mow the grass. Then Conor turned to his sisters and said, "See, I told you!" :)

Another time, when Jeff had to go to the doctor for his post-surgery checkup and was unable to drive himself, Grand-dad had to take him so Conor and Ceara went along with them. After the appointment, they all went to eat in a cafeteria-like place. Jeff said when they walked in there were a lot of older people there and he made the comment that they were all probably retired.

Jeff said he wanted to crawl under the table. I cracked up laughing when hearing both of these stories. I just thought I would share them...
Posted by Katie at 8:50 AM 1 comment: Links to this post